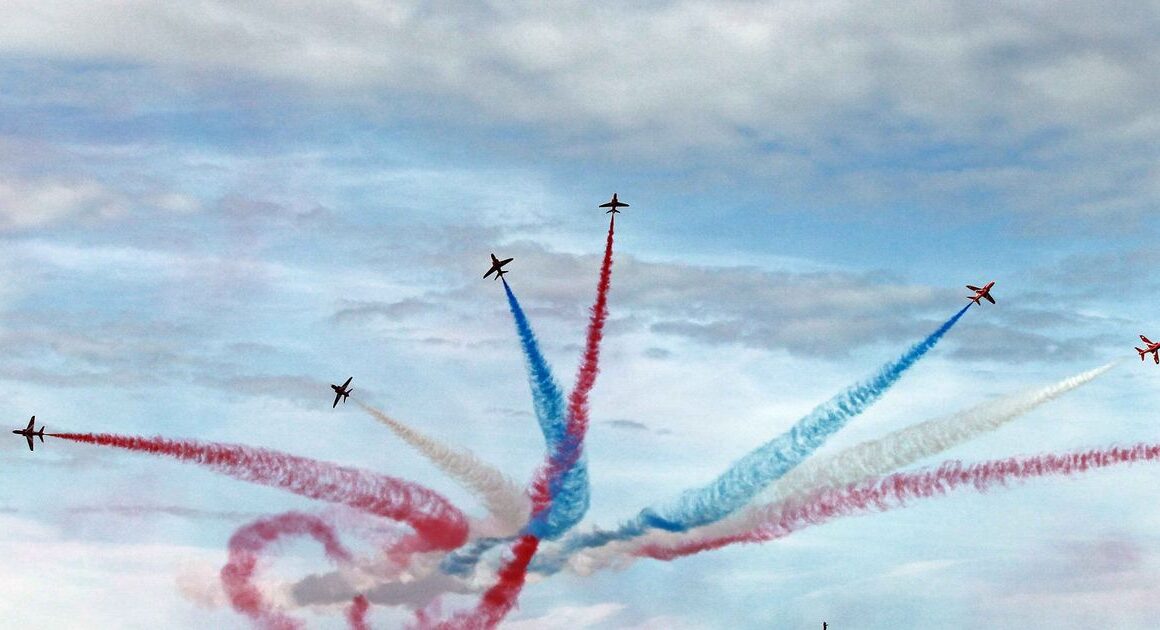 The Rhyl Air Show is back this summer with a spectacular line up, including world-class acts across both days of the August Bank Holiday.

For the first time in Rhyl Air Show’s history, The Red Arrows and The Typhoon have confirmed aerial displays for both 27th and 28th August.

Jamie Groves, Managing Director of Denbighshire Leisure Ltd, said: “Denbighshire Leisure Ltd, in partnership with Denbighshire County Council, is thrilled to be bringing back the now ‘UK renowned’ Rhyl Air Show. The Rhyl Air show is considered one of the most spectacular events across the North Wales coast. Rhyl Town Centre and Events Arena are always buzzing with excitement, and to have both the Red Arrows and Typhoon over both days, is just amazing! We can’t wait to welcome visitors and locals to Rhyl and the Denbighshire coast to enjoy this award winning show

The Air Show will take place over the Bank Holiday in August, with more details to follow about the event in due course. More information can be found on the official webpage denbighshireleisure.co.uk/RhylAirShow and Denbighshire Leisure Ltd Facebook page.

Graham Boase, Denbighshire’s Chief Executive, said: “This major event provides a significant boost to the economy of Rhyl and wider communities each time it’s staged and the line up for this year is truly amazing. Denbighshire Leisure Ltd has a strong track record of hosting such prestigious events and we are delighted to be working in partnership with them to deliver what will be major crowd-puller in the events calendar. It’s popularity has grown over the years and the Air Show is rightly renowned across the whole of the UK as being one of the leading events of its kind. Visitors to the Air Show will not be disappointed”.

The Lancaster, Grob Tutor Display Team  and two Spitfires have also been confirmed for both days, ensuring double the excitement across the whole weekend.

The Royal Air Force Aerobatic Team, the Red Arrows, is one of the world’s premier aerobatic display teams. Representing the speed, agility and precision of the Royal Air Force, the team is the public face of the service. Flying distinctive Hawk fast-jets, the team is made up of pilots, engineers and essential support staff with frontline, operational experience. Often with their trademark Diamond Nine shape, and combination of close formations and precision flying, the Red Arrows have been displaying since 1965.

A Typhoon display is a culmination of months of hard work, detailed preparation and concerted effort by the team behind the display. Whilst it is the pilot who displays the aircraft, he cannot even begin to do his role without the unfaltering commitment and backing of the dedicated group of professionals that make up the Typhoon Display Team. This year’s team from 29 Squadron comprises of specialists from every aircraft trade who, along with support and management teams, work together to bring you the dazzling spectacle that is the Typhoon Display. The team look forward to the unique challenges that a display season brings and the opportunity to showcase the Royal Air Force Typhoon aircraft to the general public.

The mission of the RAF BBMF is to maintain the priceless artefacts of our national heritage in airworthy condition in order to commemorate those who have fallen in the service of this country. The RAF BBMF also serves to promote the modern day Air Force and to inspire the future generations. The Flight operates six Spitfires, two Hurricanes, a Lancaster and the aircraft are flown by regular RAF Aircrew.

The Grob 115E, known as the Tutor T Mark 1 in RAF service, was built and equipped especially for the RAF in Mattsies, Germany between 1999 and 2002.  Originally equipping No 1 Elementary Flying Training School it replaced the Bulldog T1 in service with the RAF’s University Air Squadrons and Air Experience Flight