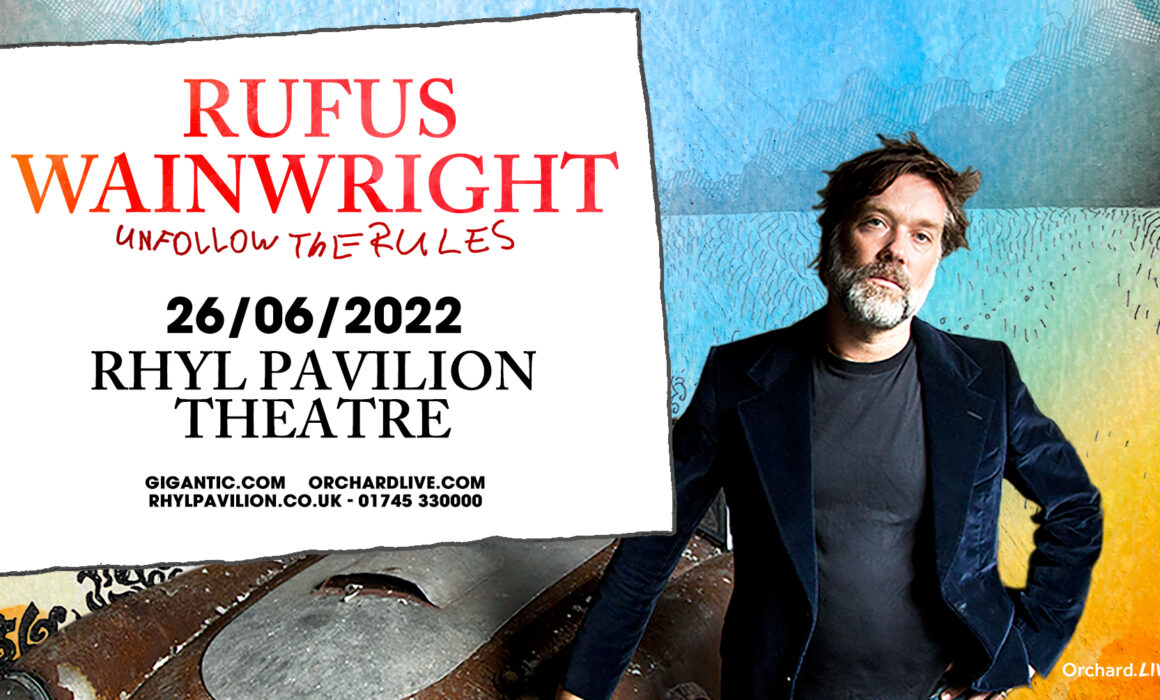 Singer-songwriter supreme Rufus Wainwright has announced a show at Rhyl Pavilion Theatre this summer which is only one of four UK Dates.

The singer-songwriter who reached 12 million views on Youtube with Choir! Choir! Choir! Covering Leonard Cohen’s famous Hallelujah, will be coming to Rhyl Pavilion Theatre on 26th June, 2022 as 1 of only 4 UK dates to celebrate his ninth studio LP and first new pop album since 2021.

Wainwright’s new album, Unfollow the Rules finds the artist at the peak of his powers, entering artistic maturity with passion, honesty, and a new-found fearlessness while remaining as creative, bold, and mischievous as ever. Produced by Mitchell Froom (Crowded House, Paul McCartney, Richard Thompson, Suzanne Vega, Randy Newman) at a variety of legendary Los Angeles studios – including Sound City Studios, United Recording, and EastWest Studios –the album serves as both bookend to Act I of an extraordinary career which, like Unfollow the Rules, began in the studios of Los Angeles, but also now as the first lines of a remarkable new chapter.

“What I would like this album to symbolize is a coming together of all the aspects of my life which have made me a seasoned artist,” says Wainwright. “My aim is to emulate the greats of yore whose second acts produced their finest work – Leonard Cohen when he made The Future, when Sinatra became Sinatra in his 40s, when Paul Simon put out Graceland. Pop music isn’t always about your waistline. Many songwriters improve with age. I’m flying the flag for staying alive!”

Jamie Groves, Managing Director of Denbighshire Leisure Ltd said: “We’re delighted to welcome Orchard Live back again this year with a variety high profile performers. This will be our second production with Orchard Live this year, following Imelda May’s appearance coming up in April, and before the festival of concerts in July with legendary band James, Jack Savoretti, Beverley Knight and Tom Grennan. There’s something for everyone.”

Pablo Janczur from Orchard Live said “We’re really excited to return to Rhyl this year with a whole host of concerts. We have a fantastic line up of talent this year with Denbighshire Leisure Ltd and after the fantastic reception we received from Tom Jones last year, we are excited to bring back high profile performers to the town”.